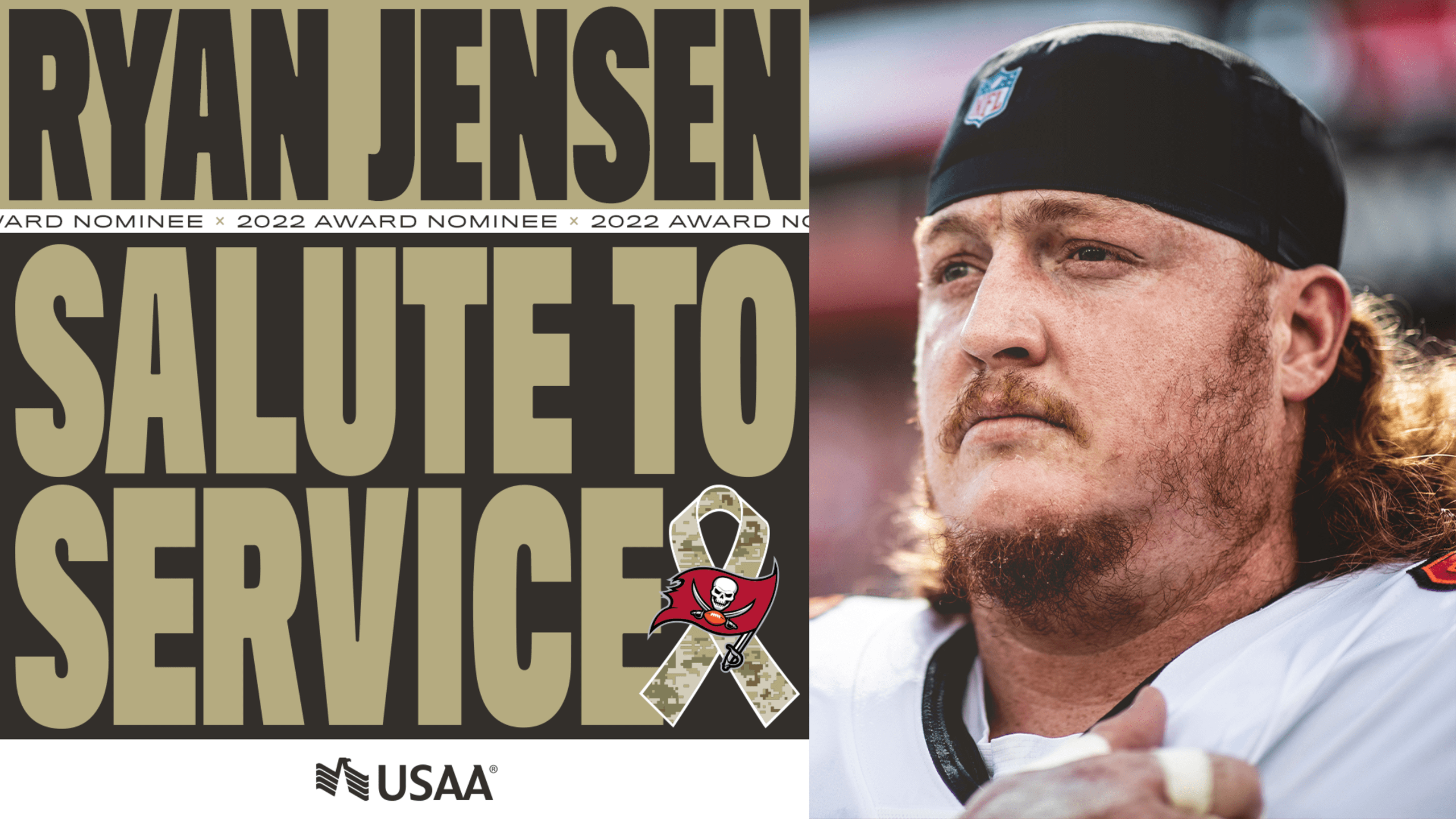 The NFL announced the 2022 nominees for the twelfth annual Salute to Service Award presented by USAA. For the Tampa Bay Buccaneers, Pro Bowl center Ryan Jensen was recognized for his contributions in supporting military families. The annual Salute to Service Award recognizes NFL players, coaches, staff and alumni who demonstrate commitment to honoring military and veteran communities. Those esteemed individuals are nominated by NFL clubs. Finalists are scheduled to be announced in January, and the recipient will be recognized at NFL Honors, a prime-time awards special that will air nationally the week of the Super Bowl.

“To be nominated for the Salute to Service Award is an honor,” said Jensen. “There is still so much more I could do, so every year I get nominated is a challenge for me to go out and out-do my previous years and to do more in the military community.”

For Jensen, an anchor in the Buccaneers’ offensive line, military advocacy hits home. He has dedicated off-the-field initiatives to Salute to Service efforts by cultivating relationships, optimizing outreach programs and gameday outreach. Jensen’s grandfather, Keith Palmer, served in Vietnam and Korea as a member of the Army’s 101st Airborne Division. In addition, Jensen’s uncle followed his footsteps into the Army, and Jensen’s adopted brother, Alec Hatfield has served in the Marine Corps – completing tours in both Afghanistan and Iraq.

“Growing up, I watched my grandpa and saw all the pictures of him being in the military,” Jensen described. “Having that respect right off the bat for military comes from my grandfather and what he did. He fought in Korea and Vietnam – just the sacrifices he made to help us. I just have a huge respect for what they do and the sacrifices they make.”

Annually, Jensen supports the Buccaneers’ Schwarzkopf Military Family of the Year Accolades, which honors military families from each branch of the armed forces. He has also visited MacDill Air Force Base in Tampa through the USO Central Florida and has helped promote fundraising efforts for the Special Operations Warrior Foundation.

On any given Sunday, Jensen ensures that local military families enjoy a rare gameday experience. He has donated nearly $30,000 to the Tampa Bay Buccaneers Foundation for his community ticket program “Jensen’s G.I.’s,” providing a variety of military organizations with the aforementioned memorable moment.

In the last couple of years, Jensen discovered a unique way to make a difference, connecting with the organization ‘Southeastern Guide Dogs’ to provide a $25,000 donation which sponsors a service dog for a veteran. That support will engender companionship and daily assistance for a military service member recovering from injury or PTSD. This effort, along with visiting local Veteran’s Assistance hospitals and hosting zoom calls to support active-duty military families, is another way that Jensen personifies ‘giving back’ to the local military community.

USAA, a leading provider of insurance and other financial services to U.S. military members, veterans and their families, will contribute $25,000 in the recipient’s name to official aid societies representing all U.S. military branches. The NFL will match USAA’s contribution by donating an additional $25,000 to the awardee’s military or veteran charity of choice.

For the first time in the history of the Salute to Service Award, fans will have a say in determining the winner. To see all the nominees and cast their vote, fans can visit NFL.com/SaluteFanVote from now until November 30.